Daily Dunya on 29-05-2022 has published news regarding salary increase in Pakistan’s budget 2022-23. The federal government is presenting the annual budget for 2022-2023 on June 10, 2022. At this time, we have not received any news from any credible source regarding the increase in salaries and allowances, and pensions of the employees. However, according to Dunya newspaper, the details of salary increase in the forthcoming budget are as follows.

The Salary and Pension Committee will submit its recommendations by June 30, 2022. Employees have the potential for a service structure and the salary and pension proposal will be implemented in the 2023-2024 budget. The commission has asked the government to complete its work by June 30, 2022.

This is news only and we cannot say that it is a final proposal or authoritative source of news. The government will finalize the budget for 2022-23. However, before the budget, they enjoy the news of salary increases.

The Pay and Pension Committee has formed almost two years ago. The government issued revised TORs of the Pay and Pension Commission in 2021. Several times its president resigned. His intelligence changed many times. The commission has repeatedly asked for an extension in the time of the final report. But so far, the commission has not reached its final conclusion on closing the pay gap. 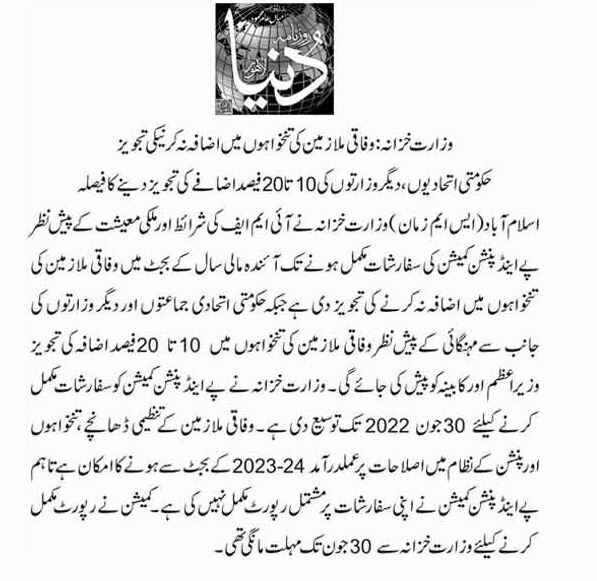 The Government of Pakistan, Finance Department will announce the next Budget 2022-23, the date of which will be presented on June 10, 2022. The Pay and Pensions Commission has submitted its report to the Ministry of Finance and the government has decided to increase the salaries of public sector employees to reduce the disparity.

Within the bureaucracy, such as public sector employees working in the Prime Minister’s and President’s Secretariat, the NAB, FBR, FIA, and judiciary are receiving double pay but other employees are facing difficulties. The government can increase the available budget by 15 to 20 percent depending on the available resources.

Latest News Regarding Salary Increase in Budget 2022-2023 in Pakistan

Employees and pensioners are no longer in a position to wait for salaries and pension commissions. He is already considering increasing the convention allowance in the budget and revising the pay scale. They are most affected by inflation. Everyone in the country has adapted to inflation.

Due to inflation, producers have increased the prices of their products. The middle man and others have also added to their allegations. In short, everyone has taken care of themselves. How can an employee increase his own salary? They just wait for the budget and expect the government to do something for them. In the current situation, employees want immediate relief, otherwise, their lives will be in more trouble.

The latest news regarding salary increase in budget 2022-23 has been published by the local newspaper. The federal government is going to present the annual budget for 2022-2023 on 10-05 2022. We have not received any news from any credible source regarding the increase in salaries and allowances and pensions of the employees. However, the Govt. employees can check the online salary increase chart for budget 2022-23 available on this page.

I'm begginer to learn the website making and SEO for my website https://www.pkstudys.com.
Previous Lahore Board 12th Class Roll No Slip 2022 Annual Exams
Next Check Pay Scale Revised in Budget 2022-2023 Grade 01 to 20 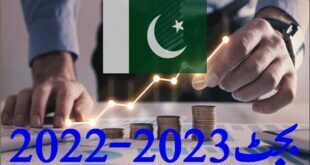 The Prime Minister of Pakistan has announced a new Ehsaas Rashan Program for May 2022, …