Punjab Educational Endowment Fund which is known as PEEF Scholarships 2022 program which has been introduced by the Mian Muhammad Shahbaz Sharif, Chief Minister of Punjab in 2008 to improve the education level in the young generation in the province of Punjab by awarding the students with laptops, prizes, and Scholarships in a variety of fields. Punjab Educational Endowment Fund Committee has been recognized in December 2008 under the Chairmanship of Chief Minister of Punjab.

PEEF offers the Scholarship program each year via publishing advertisements in newspapers for intelligent and bright students male and female who have passed Matric, FSc, and Bachelor examination by obtaining 60% marks to submit the application form available on this page and also on the official web website peef.org.

the budget of the Punjab Educational Endowment Fund has been increased by the Chief Minister of Punjab so that the students can be facilitated in a wide range in the province of Punjab by providing Scholarships this year to make better education level in the society because educated nations make educated nations and these children are our future as well as heroes of this country Pakistan.

The Punjab Government has a desire to launch a Scholarship program in all 36 districts of Punjab. Many students are ready to apply for scholarships and want to submit applications with the complete required detail via courier on the postal address of PEEF before the due date to complete the criteria.

The Punjab Educational Endowment Fund PEEF Scholarships 2022 has been organized by the Government of the Punjab which is a great initiative and the best way to encourage the abilities of brilliant students in their educational grounds. Many intelligent undergraduates cannot get into better institutions due to financial problems so scholarship enables them to get an affordable education in good colleges and universities. To apply download the scholarship application form click here.

The Punjab Educational Endowment Fund (PEEF) is out of an ordinary quota for the PEEF Scholarships 2022 at education level FA, FSc, BA for those people from the following categories who can apply in this regard. 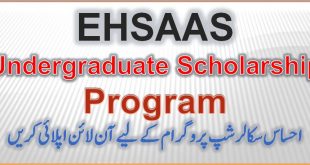 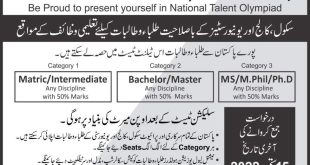 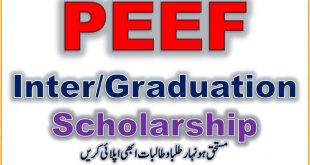 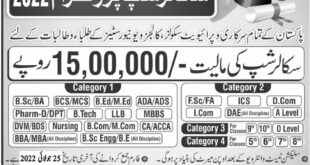